Random forests or random decision forests are an ensemble learning method for classification, regression and other tasks, that operate by constructing a multitude of decision trees at training time and outputting the class that is the mode of the classes (classification) or mean prediction (regression) of the individual trees.Random decision forests correct for decision trees' habit of overfitting to their training set. Read more 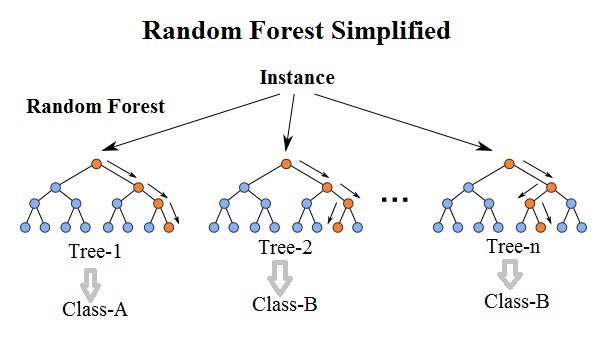 It's a supervised classification algorithm. We can see it from its name, which is to create a forest by some way and make it random. There is a direct relationship between the number of trees in the forest and the results it can get: the larger the number of trees, the more accurate the result. But one thing to note is that creating the forest is not the same as constructing the decision with information gain or gain index approach.

Each tree is grown as follows:

In the original paper on random forests, it was shown that the forest error rate depends on two things:

Reducing m reduces both the correlation and the strength. Increasing it increases both. Somewhere in between is an "optimal" range of m - usually quite wide. Using the oob error rate (see below) a value of m in the range can quickly be found. This is the only adjustable parameter to which random forests is somewhat sensitive.

How it differs from Decision Tree

The difference between Random Forest algorithm and the decision tree algorithm is that in Random Forest, the process of finding the root node and splitting the feature nodes will run randomly.

When to use to decision tree:

When to use random forest :